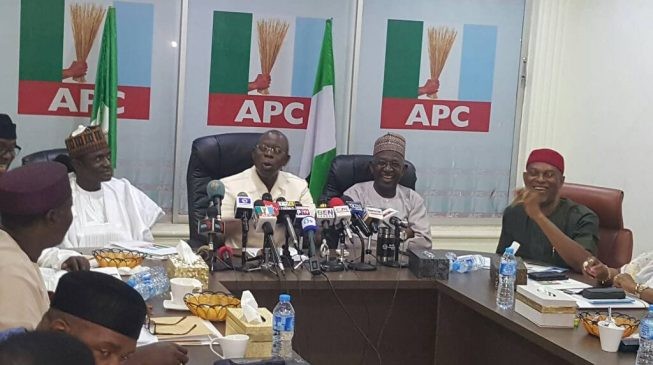 National chairman of the All Progressives Congress (APC), Adams Oshiomhole, has denied reports that the governor of Benue state, Samuel Ortom, has left the ruling party.

Ortom while speaking at a function in the state yesterday July 16th, said he has been given a red card from APC members in the state and that he is studying the political atmosphere to know which party to defect to so he can pursue his 2nd term ambition.

Reacting to the news of Ortom’s defection, Oshiomhole said the party has a cordial relationship with Ortom and that he hasn’t left. He spoke to newsmen after a closed door meeting with members of the party’s National Working Committee (NWC).

“I know that Governor Ortom is a very senior member of the party and he has said so repeatedly in print and has said to me one on one that he will not leave the APC unless he was pushed out. Since I assumed the chairmanship of this party along with my colleagues in the NWC, I know of a fact, that we have not shut out any governor and certainly not Governor Ortom. And in these days of social media, I will not be responding on the basis of rumor and unverified reports” Oshiomole said

Angel Goldy - 2017
0
After Bishop Oyedepo prays for God "to break Nigeria now, if it is his will", OAP Freeze has taken to social media to criticise...

Angel Goldy - 2017
0
Wife of former Vice president Abubakar Atiku, Titi, yesterday told an Ikeja High Court that the pastor whom she has accused of defrauding...