Home News Apostle Suleman- “Pray for Nigeria, instead of protesting” as he prepares to... 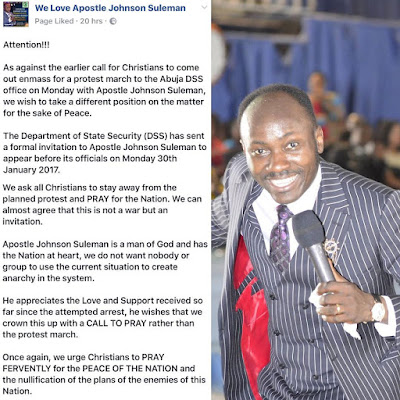 As against the earlier call by some concerned bodies for Christians to come out enmasse for a protest march to the Abuja DSS office on Monday as Apostle Johnson Suleman honours its invitation, the servant of God through his ministry, Omega Fire Ministries Inc, has urged caution against any form of protest for the sake of peace.

The Department of State Security (DSS) had sent a formal invitation to Apostle Johnson Suleman to appear before its officials on Monday 30th January 2017.

In a statement signed by the OFM Admin, Pastor David Apelorioye, the ministry pleads;
“We ask all Christians to stay away from the planned protest and pray for the nation. We can almost agree that this is not a war but an invitation.

Apostle Johnson Suleman is a man of God and has the love of the nation at heart, we do not want anybody or group to use the current situation to create anarchy in the system.

He appreciates the love and support received so far since the attempted arrest and he wishes that we crown this efforts with a call to pray rather than the protest march.

Once again, we urge Christians to pray fervently for the peace of the nation and the nullification of the plans of the enemies of this nation.”

Angel Goldy - 2021
0
Temmy Akpata, also known as Sophiya is here to bless lives with this great song titled: In Your...

30 Deep Questions to Ask a Girl—- By Richard Nana Sarfo...