Home Editorial DO WE NEED MORE PROPHETS IN NIGERIA? 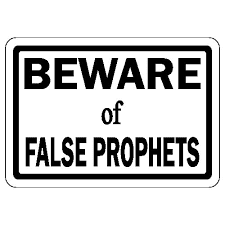 There were days when prophets were revered much more than they are right now in this dispensation. Prophets in the Bible days were seen and regarded as heaven’s mouthpiece and their messages were undoubtable. However, this age and time is littered with so many prophets who have left many unanswered questions in the mouths and hearts of desperate miracle-seeking Christians. Let’s consider these disparities between the Prophets of old and the prophets we have now:
Do we still need prophets to tell us the sources of our problems?
Rather than these prophets tell us who is behind our troubles, isn’t it just better that they just eliminate the problems? Most of these prophets have caused not a little stir in families by apportioning blames on innocent family members who would stop at nothing in proving their innocence, which eventually leads to an endless string of rancor and bickering in the families. Remember that the bible states that “we wrestle NOT AGAINST FLESH AND BLOOD…”
Do we need analysis or solution?
These endtime prophets come around and analyse the situations that people find themselves in. They even go as far as describing clothes, offices, etc, especially when they are not connected to the victim’s solution. In the Bible days, Jesus did not go about with drama, he healed some people without even asking them questions about themselves or their families. :HE WENT ABOUT DOING GOOD!
Must every prophet collect money?
There are lots of stories in the Bible about how Jesus fed lots of people and how most of these miracles were duplicated by the apostles of old without the apostles demanding for money in exchange. Nowadays, to have access to a prophet, one would need to pay lots of fees, sow seeds, and do so many things just to impress the prophet. How much do we pay to see God? we merely go on our knees, or even lie in prayers to God and we have access to him. this act of extorting money from people is really wrong and a lot should be done about it. Prophets ought to stop collecting money from people in order to prophesy to them. Jesus raised Lazarus from death. He merely spoke to the corpse and that did it!
Should prophets reveal any information at all to the public?
Rather than bring out a church member before a congregation and explain all her problems to the congregation, isn’t is just better that the prophet delivers solution to such a person in need of solution? if these Prophets are following Jesus, they will realise that Jesus never had the time to describe or magnify people’s problems, either in public or in secret. All he always did was to speak the word!
Prophets now compete with native doctors/herbalists
it is not uncommon to see prophets requesting for unimaginable things for a so called programme/revival. In a so called church programme, you see prophet asking you to come with cutlass, mirror, etc. Brother biko, the battle is not a physical one o.  it was recorded severally in the Bible that Jesus seeing the multitude had compassion on them. He didn’t just ask them to go and bring cutlass or physical weapons. if a prophet has been endued with power enough to see beyond the physical, then he needs not request for your physical weapons in physical war.
Prophets should decrease in number and not increase in Nigeria
Despite the many prophets in Nigeria, the Chibok girls were missing for a very long time and while prophets were prophesying about people’s clothes and destinies, a nation was looking for over 200 people. Money has gotten missing in this same country, yet EFCC has always been called upon to trace such funds. if a prophet can see well enough to know who is behind a person’s failure, such a prophet should be able to prophesy to a nation. God told Jeremiah in Jeremiah 1; … i have formed you and ordained you a prophet to the NATION. If things are still getting missing in a country where there are countless prophets, i think such prophets need to get other jobs to do. Am i alone in this?

Angel Goldy - 2016
0
Society pressurizes one into doing a lot of things and ladies are not left out of this pressure, if at all they do not...