U.S. based Nigerian Engineer has threatened to kill OAP Freeze for the latter’s criticism of the Nathaniel Bassey led Halleluyah challenge.

OAP received the threat after his criticism of the halleluyah challenge. see his response and reactions so far: 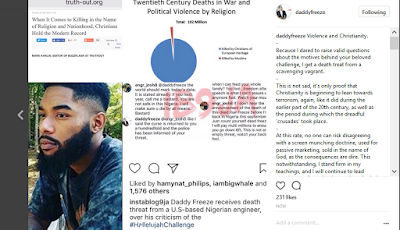 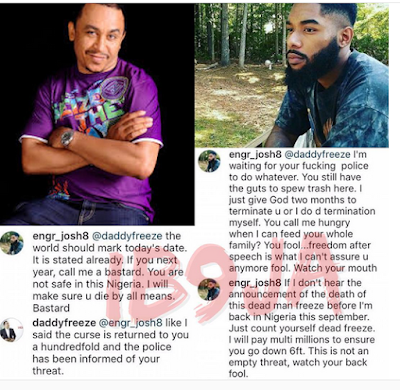 Here’s what he wrote in response to the said threat:

Violence and Christianity.
–
Because I dared to raise valid questions about the motives behind your beloved challenge, I get a death treat from a scavenging vagrant.
–
This is not sad, it’s only proof that Christianity is beginning to lean towards terrorism, again, like it did during the earlier part of the 20th century, as well as the period during which the dreadful ‘crusades’ took place.
–
At this rate, no one can risk disagreeing with a screen munching doctrine, used for passive marketing, sold in the name of God, as the consequences are dire. This notwithstanding, I stand firm in my teachings, and I will continue to lead people away from the destruction of mind altering doctrines.
–
Statistically, the greatest evil known to mankind, has been perpetrated in the name of God and it is beginning to seem, in my opinion, that Pentecostal Christianity is yearning to be added to those statistics.
–
According to ‘truth-out.org’ and ‘Juancole.com’,
–
“Perhaps it is a little too early to start comparing the death tolls caused by different religious faiths in the last 100 years, but Cole takes a stab at it -and this is what he finds. In the 20th Century, of the estimated (and this is hardly a firm figure, understated if anything) 120 million people who were killed in wars and war-like acts (terrorism is war) only a small fraction of that figure was by Muslim killings. Cole offers a chart that visually displays the dramatic lopsided accountability of Christian nations: mostly those located in Europe, the US and Canada.”
–
Have we returned to this pattern? This time, employing a more ‘passive’ approach, or are we slowly bringing back the ‘inquisitions’ of the 12th century, where non-believers were tortured and executed?
–
A deeper look at Christianity reveals that just like Jesus, every one of his disciples except John, was killed. So death threats don’t perturb me, as I speak the truth and killing my person will only make me a martyr. Also, while you are at it, remember that I serve a very big God, that reveals things to me way before even your most powerful prophets can see them. ~FRZ
#FreeTheSheeple
I’ll be teaching via Instagram live video at 12noon

he further posted a picture of the said Engineer and his supposed girlfriend as he asked for help to trace the former. 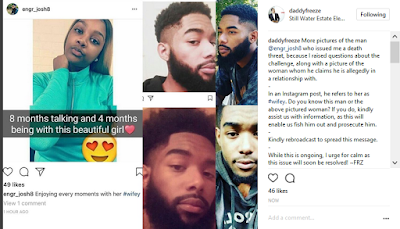 More pictures of the man @engr_josh8 who issued me a death threat, because I raised questions about the challenge, along with a picture of the woman whom he claims he is allegedly in a relationship with.
–
In an Instagram post, he refers to her as #wifey. Do you know this man or the above pictured woman? If you do, kindly assist us with information, as this will enable us fish him out and prosecute him.
–
Kindly rebroadcast to spread this message.
–
While this is ongoing, I urge for calm as this issue will soon be resolved! ~FRZ
–
#FreTheSheeple @johnjay11 @aleeygiwa

Angel Goldy - 2017
0
Join us for the "Elbow Worship Experience" Popularly known as "The Elbow Minister", Destiny de Great will be live on Facebook this Thursday, 14th December,...