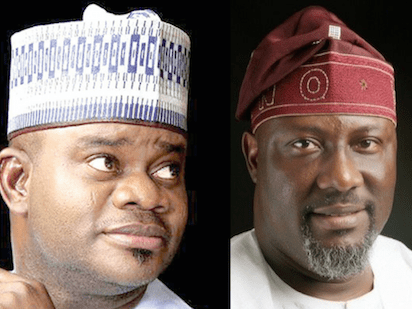 The Kogi State government has condemned the burning of four of the constituency projects of Senator Dino Melaye in Lokoja, the state capital by some hoodlums. Recall that yesterday, two of the secondary schools renovated by Dino Melaye to celebrate his 3rd year in the National Assembly, were vandalized and burnt on Tuesday night. Dino was meant to commission the projects yesterday Wednesday July 18th.

Reacting to the incident, the Director General, Media and Publicity to the state governor, Kingsley Fanwo who spoke on behalf of government during an assessment tour of the burnt facility, said the state government has directed security operatives to fish out the arsonists.

“Irrespective of who is doing the project, the fund is from the government. So whether it is the executive or legislative, such projects should rather be applauded and not destroyed”, he said.

The state commissioner for Education, Mrs. Rosemary Osikoya who was amongst the government officials who visited the sites said government will not fold it’s arms until the perpetrators were fished out.

“Exams are ongoing and these building is being used since January 2018. We expect that people will respect the sanctity of education. This act is masterminded and not accidental. The building were burnt including the chairs. If not for some serving Corps members around who tried to put out the flame, it would have been worse than this. We appeal to everybody to collaborate with us in education and not use it as a melting point for political sabotage. This is a dastard act; the state’s  interest should be paramount rather than the individual political ego”, she said.

Angel Goldy - 2017
0
As the popular Halleluyah Challenge comes to an end, Nigerian gospel singer, Nathaniel Bassey drops his new single titled "Olowogbogboro" and this has been...