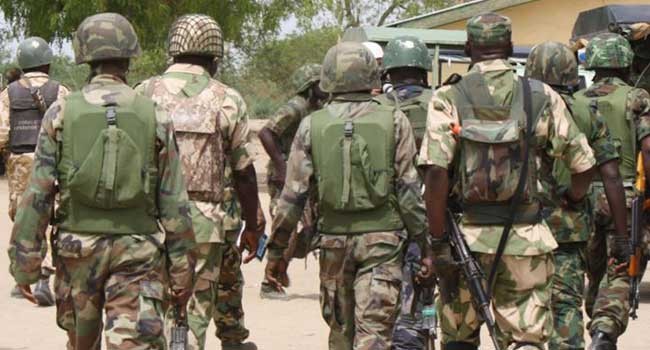 The Nigerian Army has denied media reports that it abandoned the corpse of soldiers killed by Boko Haram members in Metele, Borno state on November 18th.

In a statement released on its website, the Army said reports by Sahara Reporters that the bodies of its officials have not been evacuated from the scene of the attack is false. Read the statement below

“The attention of the Nigerian Army (NA) has once again been drawn to another false publication by an online newspaper (Sahara Reporters), alleging that the bodies of our gallant soldiers and members of Civilian Joint Task Force who lost their lives in the unfortunate Metele Attack are yet to be evacuated.

The general public is to please note that the information is despicably false and a calculated attempt to spread fake news aimed at discrediting and undermining the NA in the discharge of its constitutional roles. For the avoidance of doubt, immediately after the attack, reinforcement was sent to the location. Thereafter, a special search and rescue team led by a senior military officer was constituted and equally despatched. The team worked tirelessly, searching all the nooks and crannies of the general area and have evacuated all the gallant troops that paid the supreme price in defence of their fatherland.

3. It is sad to note that in a bid to be seen as first to break news, some media houses have discarded the ethics of their noble profession through the hasty publication of unverified information. The NA would once again reiterate the need for correct and balanced reportage especially when reporting issues regarding military operations. Furthermore, all print and electronic (online) newspapers as well as social media forums and blogs are advised to double check their information before publishing. This is because publishing false, sensational news is inimical to national security and could also cause panic, bitterness and disunity among the citizenry.

4. You are please requested to note this and disseminate same using your various media channels. Thank you.”

Angel Goldy - 2016
0
A pastor and his wife met their untimely death after they were gunned down along Gawa area in Benue State. According to Idoma...

”We may not participate in the 2019 election”PDP National chairman, Uche...

Angel Goldy - 2018
0
These tweets explain why hospitals insist on payment before treatment Surely, no amount of money is worth a life, but after reading these tweets, you...