Home General ‘The Tweet does not represent our views, Fayose’s fate will be determined...

‘The Tweet does not represent our views, Fayose’s fate will be determined by the Court at the expiration of his tenure’ – EFCC 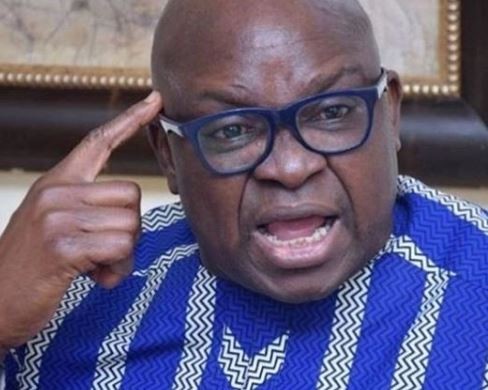 This weekend EFCC via a tweet announced the imminent revival of the criminal case against Governor Ayodele Fayose of Ekiti State just hours after his party lost the governorship election.

Reacting to public backlash from the tweet, the anti graft agency this morning issued a statement saying, ‘we observed with interest, reactions to a tweet that purportedly appeared on the Commission’s Twitter handle July 15, announcing the imminent revival of the criminal case against Governor Ayodele Fayose of Ekiti State’.

‘In the opinion of most commentators, the tweet coming a few hours after Fayose’s protege, Kolapo Olusola of the People’s Democratic Party lost the governorship election to his All progressives Congress rival, Kayode Fayemi, betrayed the partisanship of the EFCC in the political contest in Ekiti State’. 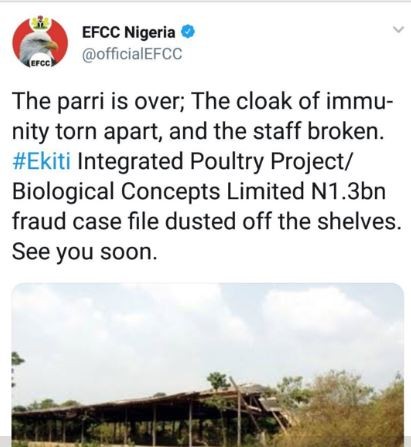 EFCC went on to say, ‘against the background, Commission is constrained to state that the purported tweet does not represent the views of the EFCC. As a law enforcement organization the Commission is apolitical and was not involved in the recent Ekiti election. It therefore has no reason to gloat over the political misfortune of any candidate or political god-father. While it is true that there is a subsisting criminal charge against Governor Fayose, the fate of the charge will be determined by the Federal High Court, Ado Ekiti, at the expiration of his tenure, not the EFCC’.

JESUS – THE NAME By Petersongs

The Gospel according to Rhymes by JUSTICE RHYMES

Angel Goldy - 2019
0
Vice President Yemi Osinbajo has stated that all African countries are corrupt and only...