Home News Despite all the challenges our country currently faces, we have a leader...

Despite all the challenges our country currently faces, we have a leader the world adulates’ – Femi Adesina writes 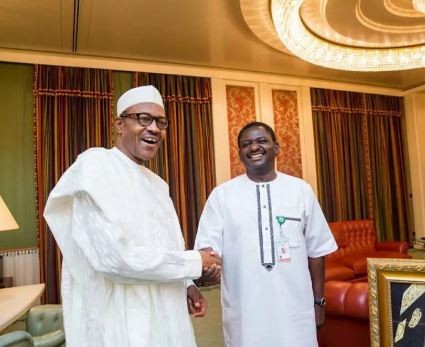 Femi Adesina, the Special Adviser to President Buhari on Media and Publicity has described his boss as a leader who is respected all over the world.

With President Buhari being the only world leader invited by the ICC to give a speech at its 20th anniversary in Netherland, Adesina said,

‘I’ve seen him address the Economic Community of West African States (ECOWAS). Seen him speak at AU (African Union) summits. Seen him address the European Parliament at Salzburg, France. Watched him speak to the world a number of times at the United Nations General Assembly (UNGA). And on Tuesday, July 17, 2018, he stood ramrod straight to address the International Criminal Court (ICC) at The Hague, Netherlands. It was a time one felt tremendously proud to be Nigerian’.

He also said,
‘I have been on the entourage of President Muhammadu Buhari to scores of countries round the world, I have seen how he is well respected by global leaders, and how that reverence rubs off on Nigeria. I tell you, despite all the challenges our country currently faces, we have a leader the world adulates. His honesty, integrity, transparency, love for his country, personal discipline, and many others, are stuff that fairy tales are made of’.

See the rest of his article below…

At 9.35 a.m Tuesday, President Buhari was ushered into into the main hall of the ICC at The Hague. He stood ramrod straight, in a way that belies his age of 75. Before taking his seat, he bowed reverently to the 17 judges, resplendent in their blue robes and white mufflers. The judges were picked from all regions of the world, and four of them were Blacks. Out of those four, the President, Judge Chile Eboe-Osuji, is Nigerian. All hail our own dear native land!

Judge Eboe-Osuji gave the opening remarks, which dwelt on the history of ICC, its successes, and how it could do a lot better in the immediate future. Turning 20 was a landmark, he stressed, and that was why the Nigerian leader had been invited to present a Keynote Address.

President Buhari was invited to the podium. Another bow, and those brisk strides again! A man they said had died, and been secretly buried this time last year. God is awesome.

That familiar voice came, and one never felt prouder to be Nigerian. The Fulani man, whom some people have tried (and still keep trying) to demonize, demean, and de-market, was addressing the world again. He was addressing a global audience, and people who mattered on this terra firma, were all ears, catching his every word. Again, really proud to be Nigerian.

What did the keynote speaker say? He first commended Judge Chile Eboe-Osuji, saying Nigeria was proud of him. He then delved into the history of the ICC, saying it was inspired by the Nuremberg trials after World War 2, which held people accountable for crimes against humanity, war crimes, crimes of genocide, and aggression. Such court, President Buhari noted, signposts hope for justice to many, and the world surely needs it.

A strong ICC, the keynote speaker added, is a catalyst for other justice efforts, expanding the reach of accountability. And then his prescriptions, going forward: Let the court make room for hearing serious cases of corruption by state actors that severely compromise the development efforts of countries and throw citizens into greater poverty.

Also, the court could include cases of illicit financial flows where countries are complicit and obstruct repatriation of stolen assets. “As AU Champion of Anti-corruption, these are issues dear to my heart,” President Buhari stressed.

Before concluding his address, the Nigerian President urged the ICC to avoid bias or political motivations in its dealings, and also challenged more states to accede to the Rome Statute, the 20th Anniversary of which was being marked.

He ended on a bright and cheery note. As Nigeria prepares for general elections next year, the process would be free and fair. There would be no repeat of the 2011 post-election riots and loss of lives, which led the ICC to commence preliminary investigations against Nigeria.

The applause was thunderous, as a man of integrity, Mai Gaskiya (the honest man) concluded his address. It was a day of glory for Nigeria, and all Nigerians of goodwill. Truly, a prophet often has more honour outside, than in his own country. But then, this prophet undoubtedly has honour everywhere.

Angel Goldy - 2018
0
Occupants of a tricycle are currently being treated at the Federal Medical Center Asaba after a police van rammed into them this morning. Activist, Prince...