The life of 32-year-old Victoria Ekpe, pictured above, has been abruptly cut short after a drunk policeman, Sergeant Edu Nkanu, who is also her neighbour at 11 Joseph Mkpa Street, Calabar, shot her to death in front of her six-year-old daughter last Sunday. 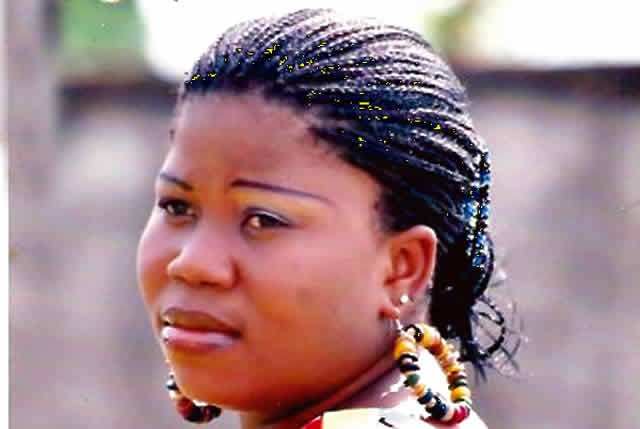 According to reports, the drunk police officer had staggered home moments before he pulled his trigger.

Narrating what happeed, a sister of the deceased, Elizabeth Bassey, who survived the bullet of the trigger-happy policeman, said

”On Sunday evening myself and my late cousin went out and came back by 8:30p.m. She remained at the passage pressing her phone while I went in to change. By the time I came out she was still on her phone, and she asked me what was going on inside the room and I told her nothing. At that parti

cular time, Nkanu came back from an outing and we heard our mummy, who was outside, asking him what he brought

from his outing. He told her he did not come home with anything. He left our mother and came to the passage where we were standing. I asked him why he always gets drunk anytime he goes out. Immediately, he turned and brought out a pistol from his pocket, cocked it and pointed it at me saying, ‘This is what I brought from the party.’ I got scared and ran inside the house. My late sister was still busy with her phone on the passage not paying attention to our direction. Nkanu then turned the gun in her direction and shot her by her neck.

Another witness and elder sister to the late Victoria, Ekanem Ekpe, said her sister was killed in front of her six-year-old daughter, Blessing, who drew attention of all to the death of her mother while screaming. Ekanem said she was inside the house when she heard the gunshot

“But I did not come out immediately until I heard Blessing screaming
, ‘Uncle you have killed my mummy,’ that was when I came out, and behold, my sister was lying down dead, blood was gushing out from the side of her neck. I saw him with a gun and I asked, ‘Nkanu, what happened, you have killed my sister.’ He was just starring at the gun and at my sister. All what he could say was, ‘Mma Nurse, I don’t know what happened.’ That was when I held him and started shouting before people gathered and managed to collect the gun from him. I don’t understand why a policeman would rather take people’s lives instead of saving lives. We were told at the police station that he had killed someone like this before when he was serving in Obubra. He has a criminal file with the police before now. Please we want justice for my sister.”
Confirming the incident, the spokesperson of the state police command, Irene Ugbo, said the police officer has been arrested and would be charged to court soon.

“The policeman has been arrested; he is in our custody and we are going to deal with him decisively because the gun that he used to shoot the deceased is not our gun. It is a locally made pistol; so he is going to tell us where he got that gun from and who ordered him to shoot an innocent woman. There was no quarrel between them as we were told. Although we heard that he was used to threatening people in the house; and that particular day, he released the bullet. We are going to try him for murder, dismiss him and send him to court.”

On the allegation that he had killed a person before, she said, “I don’t know about that but that was what I also heard, investigation will prove if it is true.”