Home News ”Fayemi can start his probe now, his vendetta mission will consume him”...

”Fayemi can start his probe now, his vendetta mission will consume him” Ekiti government 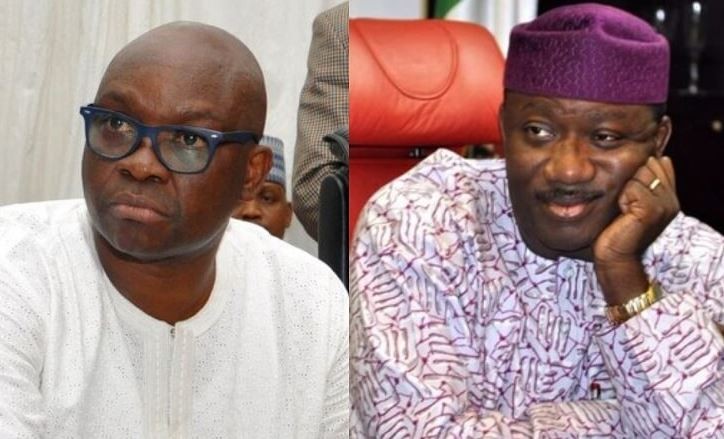 The Ekiti State Government has challenged the governor-elect, Dr. Kayode Fayemi to begin his probe of the Ayodele Fayose led government now instead of waiting till October 16 that he will be sworn in, saying; “it is obvious that he will be consumed in his vendetta mission and rather than grandstanding, Fayemi should first seek legitimacy for his stolen mandate. ”

Governor Fayose’s Special Assistant on Public Communications and New Media, Lere Olayinka, said in his reaction to Fayemi’s threat that “he (Fayemi) should stop living in the world where threat of probe scares people because we in the government of Fayose are not afraid of victimization and vendetta that Fayemi is obviously coming with.”

He described Fayemi as a beneficiary of a stolen mandate who is afraid to even come to the open to celebrate his false victory, adding that; “Even yesterday when he went to collect the certificate of the mandate that was snatched and handed to him by the powers that be in Abuja, he had to be protected by police helicopter and hundreds of armed policemen. One wonders how he is going to rule the people they forced him on.”

Olayinka said; “If Fayemi is on vendetta mission, which is obvious that he is, he will first destroy himself because like Ekiti and its people survived him during his first tenure, the people will outlive him this time too.

“During his first tenure, he probed the government of Engr Segun Oni and said he (Oni) should refund N5.4 billion to the state government account. He went further to say that the state government should explore all legal means by inviting anti-graft bodies like Economic and Financial Crime Commission (EFCC) and Independent Corrupt Practices and Other Related Offences (ICPC) including courts to compel Oni and others so indicted to refund the money to the government purse.

“However, he is now wining and dining with the same Segun Oni.”

Declaring that all books of the government are open for the public to see, Governor Fayose’s spokesperson said “it is funny that the same Fayemi, who refused to appear before a duly constituted commission of inquiry is the one talking talking about probe.

He said; “What is he waiting for? Can’t he start the probe today?

“As for us, we have counted the cost for shenanigans of Fayemi and his Abuja impostors and we are not afraid to confront them when the time comes.

“To us, there are just two things that can come from dictators – death and incarceration, we are not afraid of any.”