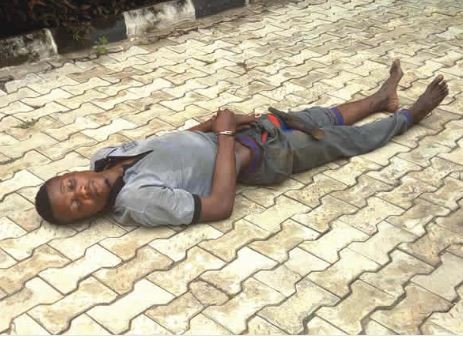 The Police in Ondo State has revealed that the suspected kidnapper who was arrested in a failed kidnap attempt in Owo is dead, following complications from a high intake of Tramadol.

The suspect had been unconscious since his arrest over the August 5 incident at a chemist in Owo. Police Public Relations Officer for Ondo State Command, Femi Joseph announced news of his death today in Akure.

According to Joseph, the suspect died at Owo General Hospital where medical personnel had battled to revive him.

“The suspect died nine days after we arrested him; we thought he would be revived so that he could help us in our investigation. Unfortunately, he died yesterday (Monday). This could be connected with his suspected high intake of Tramadol. We are using this opportunity to further educate the public, especially parents, to monitor their wards and the kind of company they keep,’’ he said.

The suspected kidnappers and two others, still at large, had stormed Chinery Pharmacy in Owo township with the intention of kidnapping the pharmacist.

Angel Goldy - 2017
0
Gbagyi carnival has been described as the melting point of Nigerian hospitality and the beginning of Unity, Peace and development if properly...

Angel Goldy - 2018
0
After his arrest, photo of the room where suspected boyfriend killed and buried daughter of ex-deputy governor of Ondo state emerges Adeyemi Alao, the boyfriend...