Home Entertainment MY PROPHECIES ARE AUTHENTIC, PEOPLES PRAYERS PREVAILED – TB JOSHUA ON US... 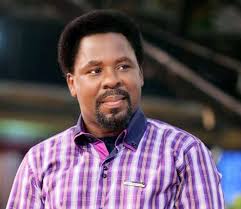 General Overseer of the Synagogue Church of All Nations, Prophet Temitope Joshua, has said the outcome of the U.S election was an indication of power of prayers, adding that people conversant with the efficacy of his prophecies went into fervent prayers, begging God for the prophecy’s reversal.
He compared the U.S presidential election’s outcome with that of biblical Jonah, who prophesied that God would destroy the city of Nineveh within 40 days, a prophecy, which was averted by sincere prayers of the inhabitants of the city.
Joshua, who spoke at a special Sunday service at the church’s headquarters in Ikotun Egbe, Lagos, told the congregation that he received many emails from some Americans confirming that his prophecy on the election spurred them to intense prayers, which God eventually hearkened to.

“Thousands of people that heard my prophecy prayed to God, they fasted and prayed that God should change the prophecy. That a prophecy was disclosed and did not come to pass does not mean that it is not authentic,” he said.

Confirming the power of prayer in prophetic utterances, Joshua said:

“They know my antecedent that what I say always come to pass. As a result, they went to God in prayer. .

This is the power of prayer; it is not a crime to tell you. Look at the track record of the person that is talking; the boat will be rocked and there will be challenges. What else do you need? Let’s believe in the power of prayer.”

Angel Goldy - 2021
3
Here's the much anticipated song titled "Thank you Lord" by Marvellous Osajie, produced by...