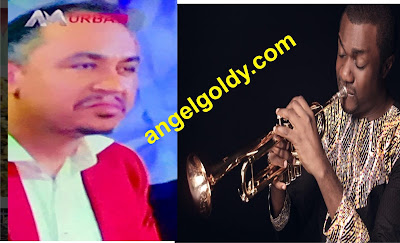 As the popular Halleluyah Challenge comes to an end, Nigerian gospel singer, Nathaniel Bassey drops his new single titled “Olowogbogboro” and this has been causing an uproar.

OAP Freeze is of the opinion that Nathaniel Bassey put up all of the online “sessions” just to create awareness for his song. He also stated that he lost interest after series of reported unverified testimonies and how God allegedly left his lofty throne to come and repair refrigerators and also help Nigerians look for their international passports.

See more  after the cut: 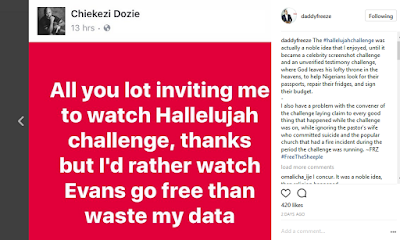 The #hallelujahchallenge was actually a noble idea that I enjoyed, until it became a celebrity screenshot challenge and an unverified testimony challenge, where God leaves his lofty throne in the heavens, to help Nigerians look for their passports, repair their fridges, and sign their budget.
–
I also have a problem with the convener of the challenge laying claim to every good thing that happened while the challenge was on, while ignoring the pastor’s wife who committed suicide and the popular church that had a fire incident during the period the challenge was running. ~FRZ
#FreeTheSheeple

OAP Freeze further complained about the kind of testimonies that were shared in another post: 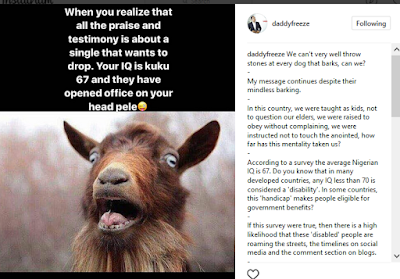 We can’t very well throw stones at every dog that barks, can we?
–
My message continues despite their mindless barking.
–
In this country, we were taught as kids, not to question our elders, we were raised to obey without complaining, we were instructed not to touch the anointed, how far has this mentality taken us?
–
According to a survey the average Nigerian IQ is 67. Do you know that in many developed countries, any IQ less than 70 is considered a ‘disability’. In some countries, this ‘handicap’ makes people eligible for government benefits?
–
If this survey were true, then there is a high likelihood that these ‘disabled’ people are roaming the streets, the timelines on social media and the comment section on blogs.
–
Do you know that ‘a general lack of curiosity’ is one of the signs of a low intelligence quotient? Can you see how this ‘lack of curiosity’ is manifested each time I raise a valid question, especially when it comes to Christianity?
–
Whales, primates and many other mammals have been known to exhibit ‘curiosity’ so why is our own cognitive handicap so overwhelming?
–
Someone claimed he was looking for a passport inside his own house and he found it, now that’s a testimony. The passport was right there looking at him all along, yet his carelessness became a matter of national importance.
–
If these were the kinds of testimonies Jesus had, do you honestly believe Christianity will still be alive 2000 years later?
–
A vast majority of Jesus miracles were ‘verified’. Lazarus was dead for 4 days and was already decaying and smelling, before Jesus raised him, while blind Bartimaeus was a popular blind man that many were familiar with, so please let’s not turn Jesus into a fridge repairer, because of our hunger for ‘testimonies’.
–
John 11:39 KJV
[39] Jesus said, Take ye away the stone. Martha, the sister of him that was dead, saith unto him, Lord, by this time he stinketh: for he hath been dead four days.
–
Mark 10:46 KJV
[46] and as he went out of Jericho with his disciples and a great number of people, blind Bartimaeus, the son of Timaeus, sat by the highway side begging. 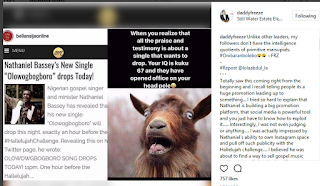 he wrote:
Unlike other leaders, my followers don’t have the intelligence quotients of primitive marsupials. #Onibaranbolebo😂😂 ~FRZ
–
#Repost @lolaabdul_la
・・・
Totally saw this coming right from the beginning and I recall telling people its a huge promotion leading up to something… I tried so hard to explain that Nathaniel is building a big promotion platform, that social media is powerful tool and you just have to know how to exploit it….. Interestingly, I was not even judging or anything…. I was actually impressed by Nathaniel’s ability to own Instagram space and pull off such publicity with the Hallelujah challenge…. I believed he was about to find a way to sell gospel music and I was actually hoping he will succeed…. However, it’s always interesting to note that anything related to religion is not to be questioned or discussed on this side of the planet…. You are just supposed to take it and agree to it as it is presented to you without a single thought of your own no matter how intelligent or educated you are. In otherwords, when it is religious matter, you are to set your brain aside…. In fact, I was chastised by some of my people on the basis that it is wrong for me to see something about praising God and start thinking it relates to promotion or any money making venture for that matter…… I was even told the reason I raise queries about religious matter is because I don’t have faith…. The fact that I refused to lose my own sleep because of someone else’s money making venture even made it worse (yes, I refused all invitations to join the challenge)…. Meanwhile, here I was actually impressed that someone was about to find a way to sell gospel music….. Ah well, from those of us who question things that pique our interests whether it relates to religion or otherwise, congratulations Nathaniel, we hope you break bank with the number of downloads you will get from your new single; Olowogbogboro…. For those who are about to drop stupid comments, please don’t try it. Just waka pass.
For the record, I am a Christian and I was born into a Methodist family.
#MyPeopleSufferForLackOfKnowledge #FreeYourselfFromReligiousSlavery #FollowGod

Angel Goldy - 2017
0
Gbagyi carnival has been described as the melting point of Nigerian hospitality and the beginning of Unity, Peace and development if properly...

Angel Goldy - 2016
0
1. A man without a source of income Whether or not a woman is after your money, no woman will like to be hooked up...