Home Entertainment Pastor who defrauded me of N918m was my ‘errand boy’- wife of... 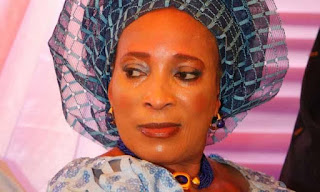 Wife of former Vice president Abubakar Atiku, Titi, yesterday told an Ikeja High Court that the pastor whom she has accused of defrauding her of N918 million was her “errand boy”.
Mrs Atiku last year dragged the accused, Nsikak Akpan-Jacobs, before the court with claims that he defrauded her of the said amount of money.
She petitioned the EFCC who filed a 14-count charge against Akpan-Jacobs bordering on conspiracy, stealing and fraudulent conversion of property worth N918 million belonging to THA Shipping Maritime Services Ltd.
According to investigations by EFCC, THA Shipping Maritime Services Ltd, a company created in 2000, is owned by Mrs Atiku, Akpan-Jacobs and Fred Holmes, her German business partner with Mrs Atiku being the major shareholder with 49 per cent shares, while Holmes and Akpan-Jacobs each had 25 per cent shares. It is alleged that Akpan-Jacobs, who doubled as the company’s Managing Director and Secretary, went to the Corporate Affairs Commission (CAC) to alter the company’s share holding formula in his favour and forged the company’s board resolutions. He allegedly allotted 70 per cent shares to himself and 15 per cent shares each to Titi and Holmes. With the new shares formula, he secretly sold a property belonging to the company to Dana Motors ltd for N918 million and used the money to allegedly fund his gubernatorial campaign in Akwa Ibom in the last election.
The case was called for hearing yesterday and while being examined by Mr Amos Ibe, the defence counsel to Akpan-Jacobs, Mrs Atiku said Akpan-Jacobs was just her errand boy whom she trusted and made the managing director of her company because he was a pastor. She told the court that she formed the company with her maiden name, Florence Doregos, because back then she was in public office and that with her influence, a lot of people wanted to do business with them. She alleged that Akpan-Jacobs used her company building as collateral to collect  a huge loan from a bank and that when the banks were coming after him, he started to sell off some of their properties.

“I did not know that it would turn out like this. I would have documented all our transactions. I admit I didn’t have any documents to prove that I invested money into the company, Jacobs cannot deny that I that I did not invest money. He is guilty from head to toe. Jacobs did everything on my behalf as I was still in the civil service as at that time. I could not leave my post then. He gave me a breakdown of expenses to be incurred and I still have the breakdown, but he never signed it. Being the one with the largest share, I contributed N49 million to buy the land situated at No. 63A,Amuwo Odofin Lagos, while my German partner, Holmes, brought two cranes from Germany.  He even, at one point, forged my signature. We put a Caveat Emptor on the property warning prospective buyers, but Dana Motors went ahead and bought the property claiming that they had an agreement with the managing director to collect their money, should any litigation arose. My lawyer later got to know that the property was sold for N918 million, which Jacobs claimed was used to offset the loan he collected from the bank and also pay off other loans. All this, he did, without my knowledge.”

When asked by counsel to the accused why he was made a managing director when he was just an errand boy according to her, Mrs Atiku replied

“He was made an MD to stand in for Mr Fred Holmes because Holmes had not resigned from his job. When it was time for Akpan to step down as the MD, he refused because by then he had perfected his fraudulent acts.”

Responding to claims by Akpan-Jacobs counsel that  THA Shipping Maritime Services Ltd was owned by the accused and that he only brought her on board to bring in big briefs and clients, Mrs Atiku said

“Is he the one who bought the land, built the building? He was merely supervising. My clout gave the company a lot of prestige, a lot of people wanted to do business with us and people brought a lot of containers to us,” she said

The presiding judge, Justice Oluwatoyin Ipaye, adjourned the case until July 6th for continuation of trial.

Angel Goldy - 2018
0
''I steal honda cars because they are easy to unlock and sell'' Suspect A 24-year-old notorious car thief, Yemi Adeoye, says he specialized in stealing Honda...