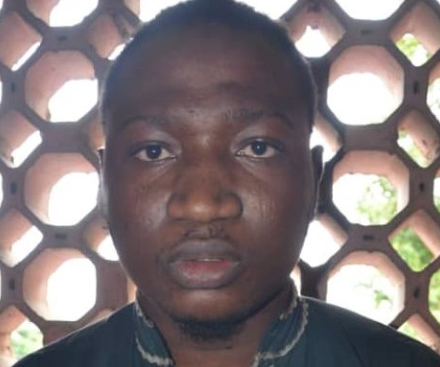 The Lagos state police command have arrested 23-year-old Muslim cleric, Mustapha Hameed, pictured above, for allegedly raping a 29-year-old student of Federal College of Education (Technical), Akoka, Lagos after he claimed he saw a vision that she would die in 24 hours, unless the student took three spiritual baths.

Parading the suspect before newsmen, the state commissioner of police, Edgal Imohimi, said

“The Alfa deceived the victim that he saw in a vision that she was going to die within 24 hours. He took the girl to Ikorodu, Lagos, for cleansing so that she will not die. At Ikorodu, he raped the girl, who was a virgin. He thereafter wiped of her blood with a white handkerchief and since then, according to the victim’s father, the girl has been behaving abnormally because she was completely devastated and traumatised by the incident”.

While speaking to newsmen, Hammed confessed to the crime

“On April 7, 2018, I called the girl to come and meet me at my house. The girl is a friend to my girlfriend. When she came, I told her that I saw a vision that she has spiritual husband while I was praying and told her she needed to bath three times to solve the spiritual problem. The girl agreed to follow me to my house in Ikorodu. When we got there, she bathed the first time, but before she had the second bath, I had put a frog inside the water. I threw the frog inside the water because I want to marry her but do not know how to tell her. When she saw the frog, she ran out of the bathroom. I told her that it was a bad sign and she asked what to do. I then told her to call her boyfriend to meet her at my place. She told me that she could not call anybody and asked me to help her to do everything. She said she was still a virgin and told me to deflower her, so I did. But it was on that day that I realised that she was a virgin.

When we came back to Bariga from Ikorodu, I saw her about two weeks ago and she was fine. I was arrested on Thursday, July 12, and they said I raped the girl and used her to do something; I did not use her to do anything.” he said

The police chief said the case had been transferred to the Gender Section Unit for further investigation, adding that the suspect would be charged to court at the end of investigation

Angel Goldy - 2019
0
A Nigerian lady took to Twitter to drag her friend who she accused of...

Gunmen allegedly abduct 20 persons on the outskirts of Abuja